Absolute Magnitude is an international travelling art project. It started as an idea in exhibition collaboration between MA fine art students, studying online with the Open College of the Arts, and largely coincided with the launch of theViewergallery itself.

Absolute Magnitude is the measure of a celestial object's intrinsic brightness, or an expression of a star’s luminosity.
It allows the true brightnesses of objects to be compared without regard to distance.

Artists contributed a piece to this travelling exhibition, which was sent as a package to each other to show in any display or exhibition context. The brief was that the piece was postcard size, and upon the given theme.
Documentation would only be revealed to each other at the end of the project.

Absolute Magnitude II Earth comprised multiple pieces and has the potential for multiple responses. With different formatting and organisation, such travelling exhibitions, inventive displays in gallery, domestic or work settings, allows art to be created without regard to distance, much like the online learning experience.
This travelling exhibition project has survived considerable mishaps, including the loss of all the works at sea. Still, the connections were made and sets of ideas travelled all around the world through the hands of diverse artists, approaches, settings and audiences.
Full reports and the other artists responses to follow.

I went to Tate Britain in London on 14th of March 2014, with the intention of finding the right place for each card. I was looking for visual matches, interesting juxtapositions and parallels, in order to interpret and contextualise both the postcards and the exhibits in new ways. The project was not without its audience as some visitors asked me what I was doing, and one woman in particular was intrigued, and so I showed her some of the images in progress.

I realised that many possible connections could be made, contextually, literally, and through form or colour. It’s always tricky to line things up and take what you see. I also thought of the location of each artist and hoped they might get a kick out of seeing their work in such a venue and related to works they may never visit. 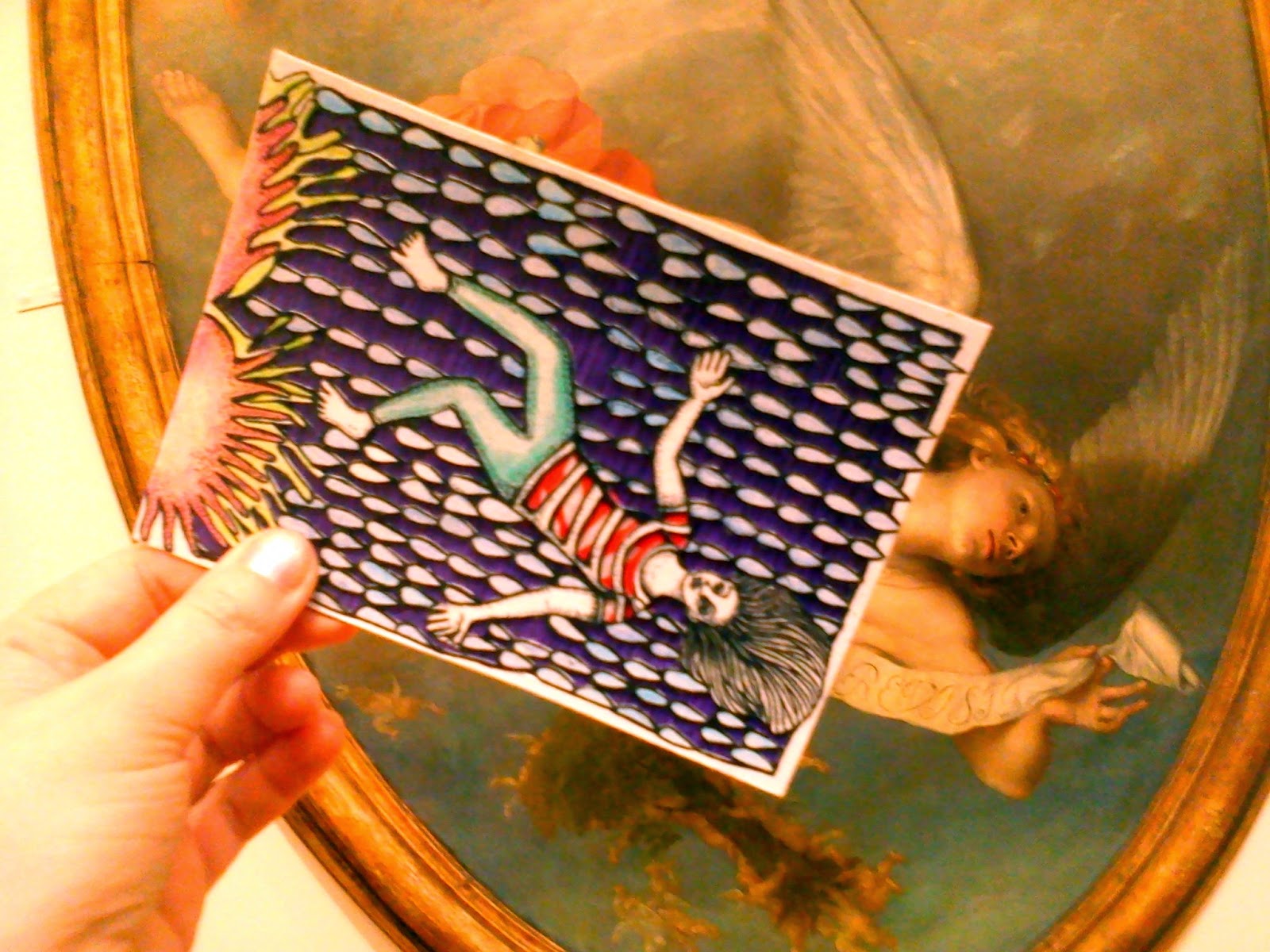 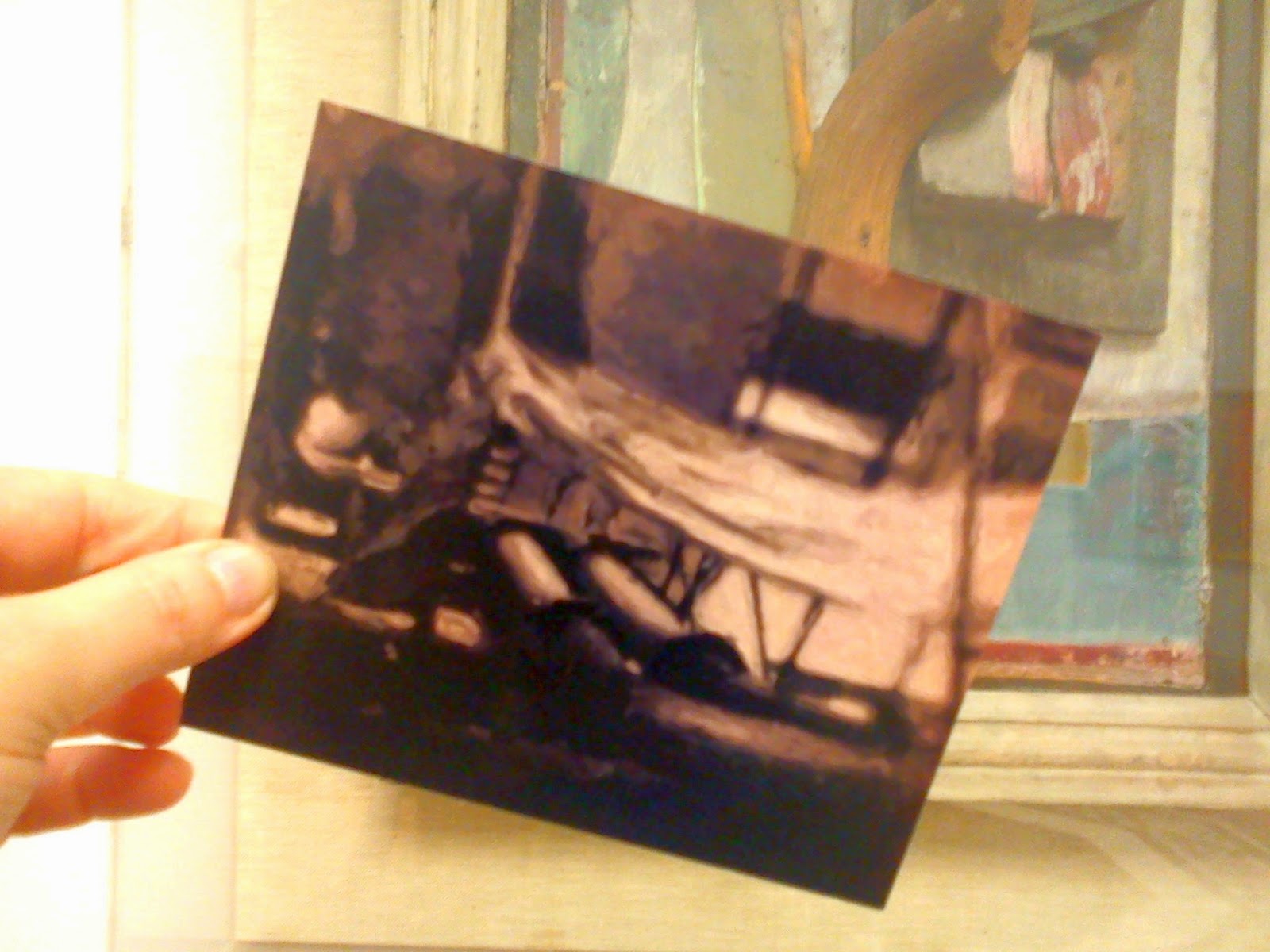 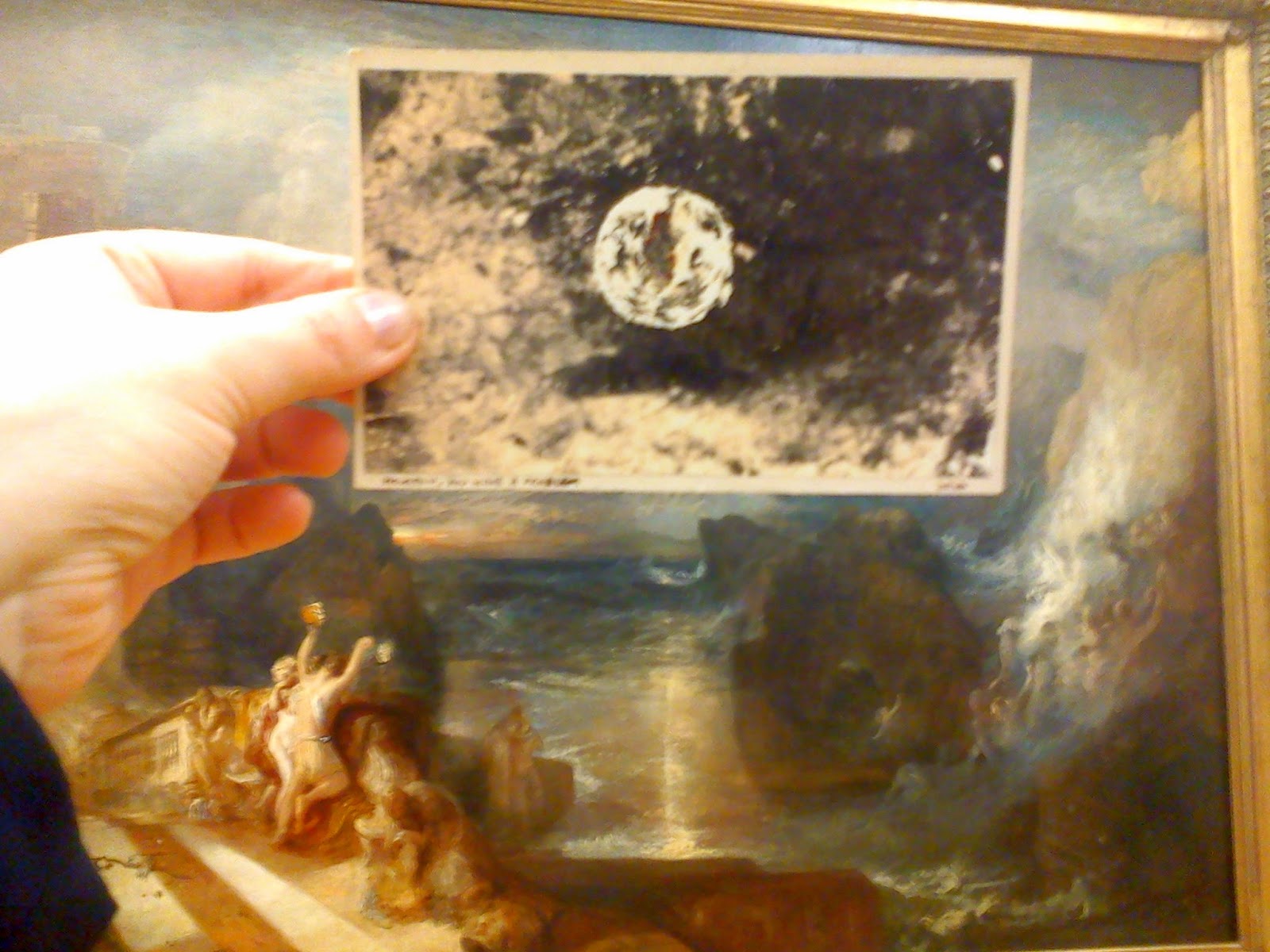 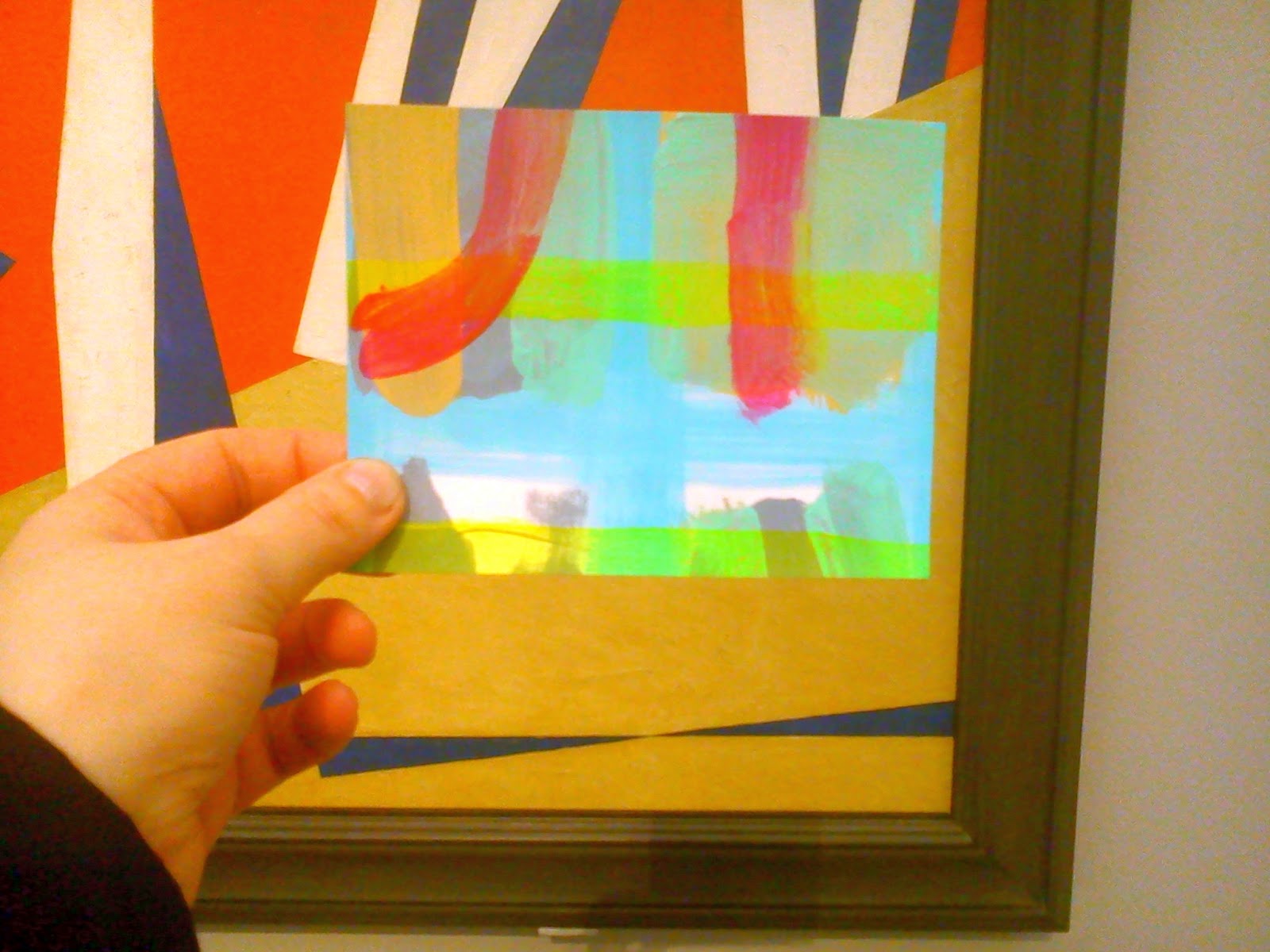 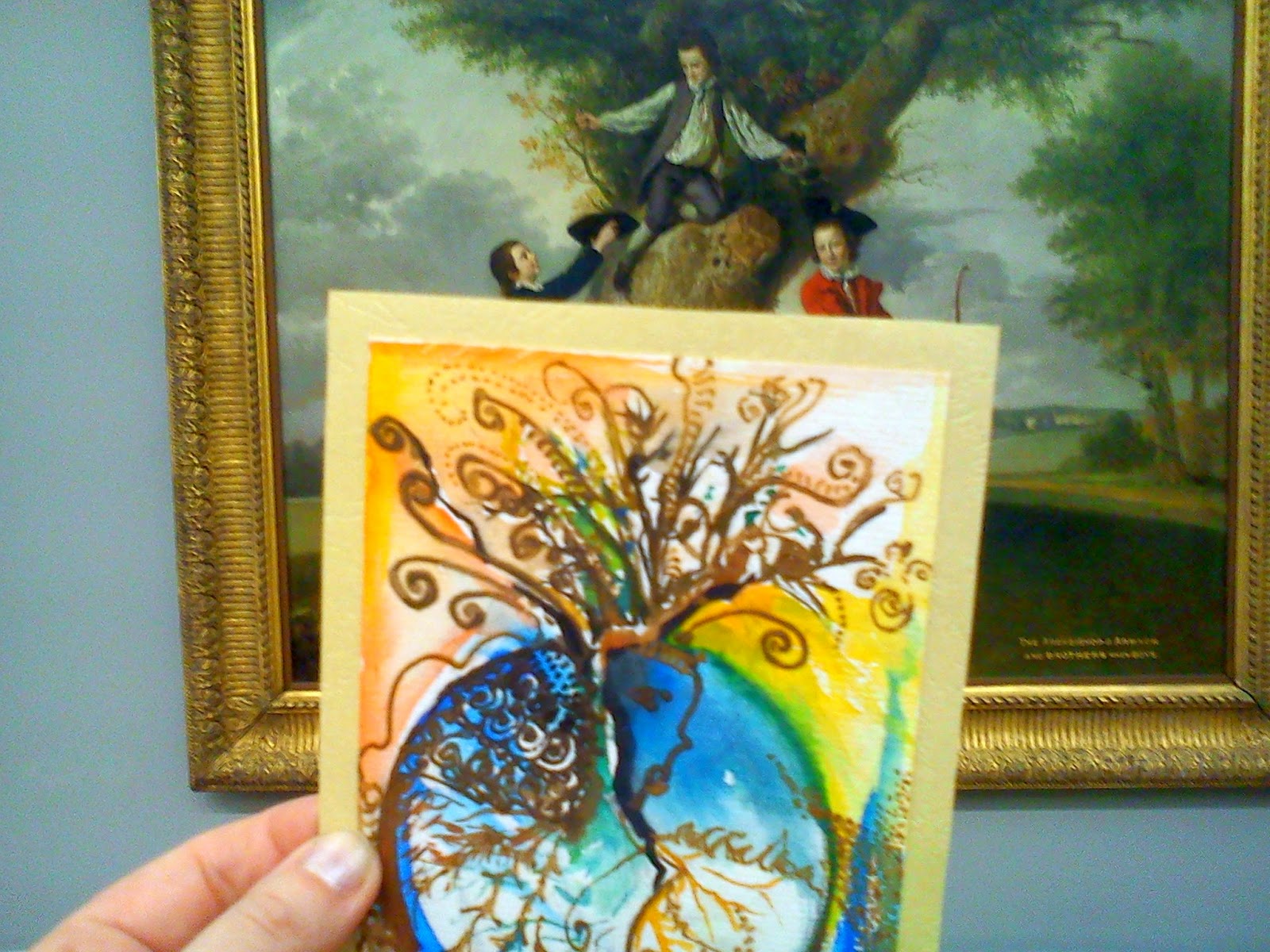 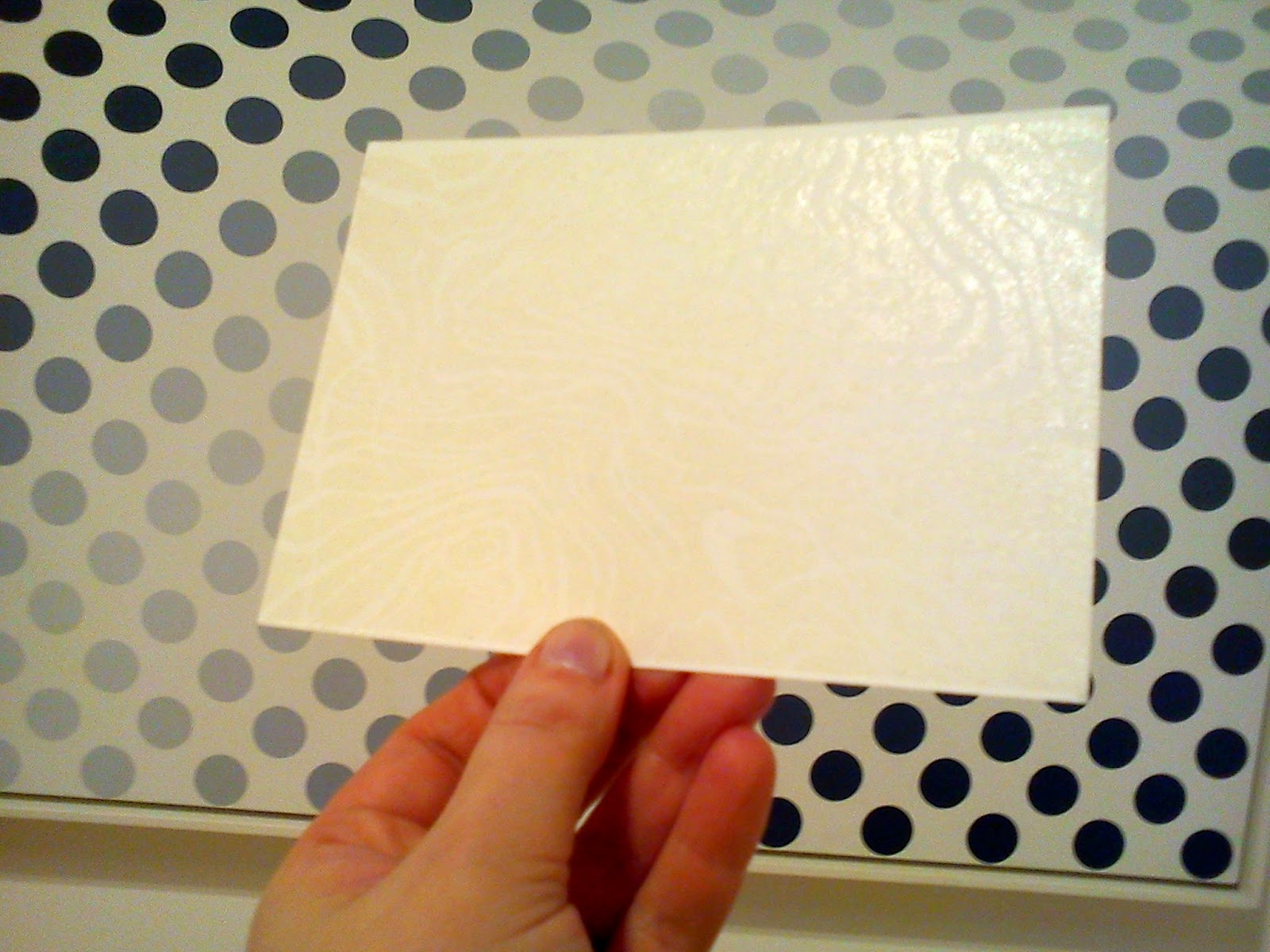 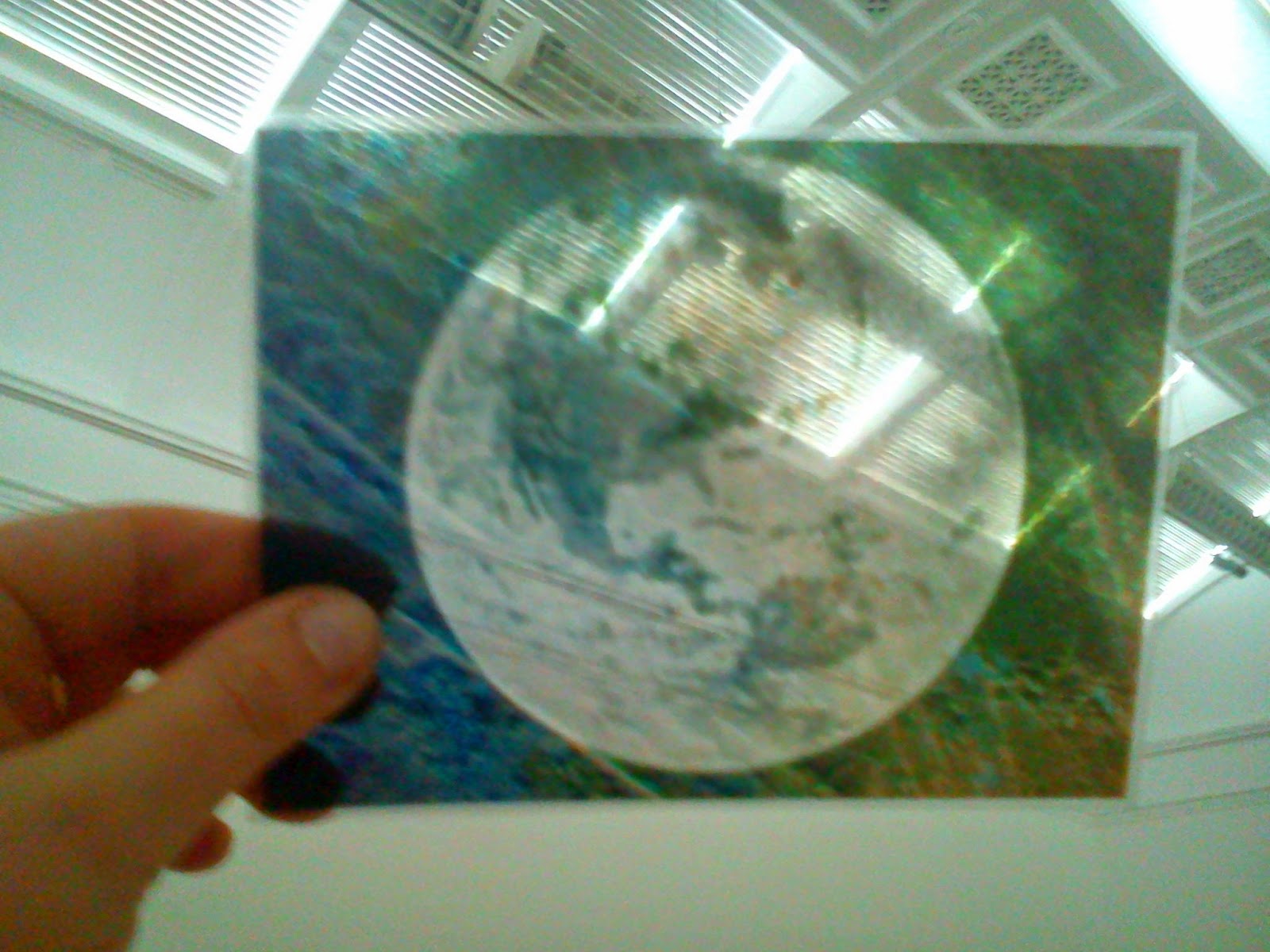 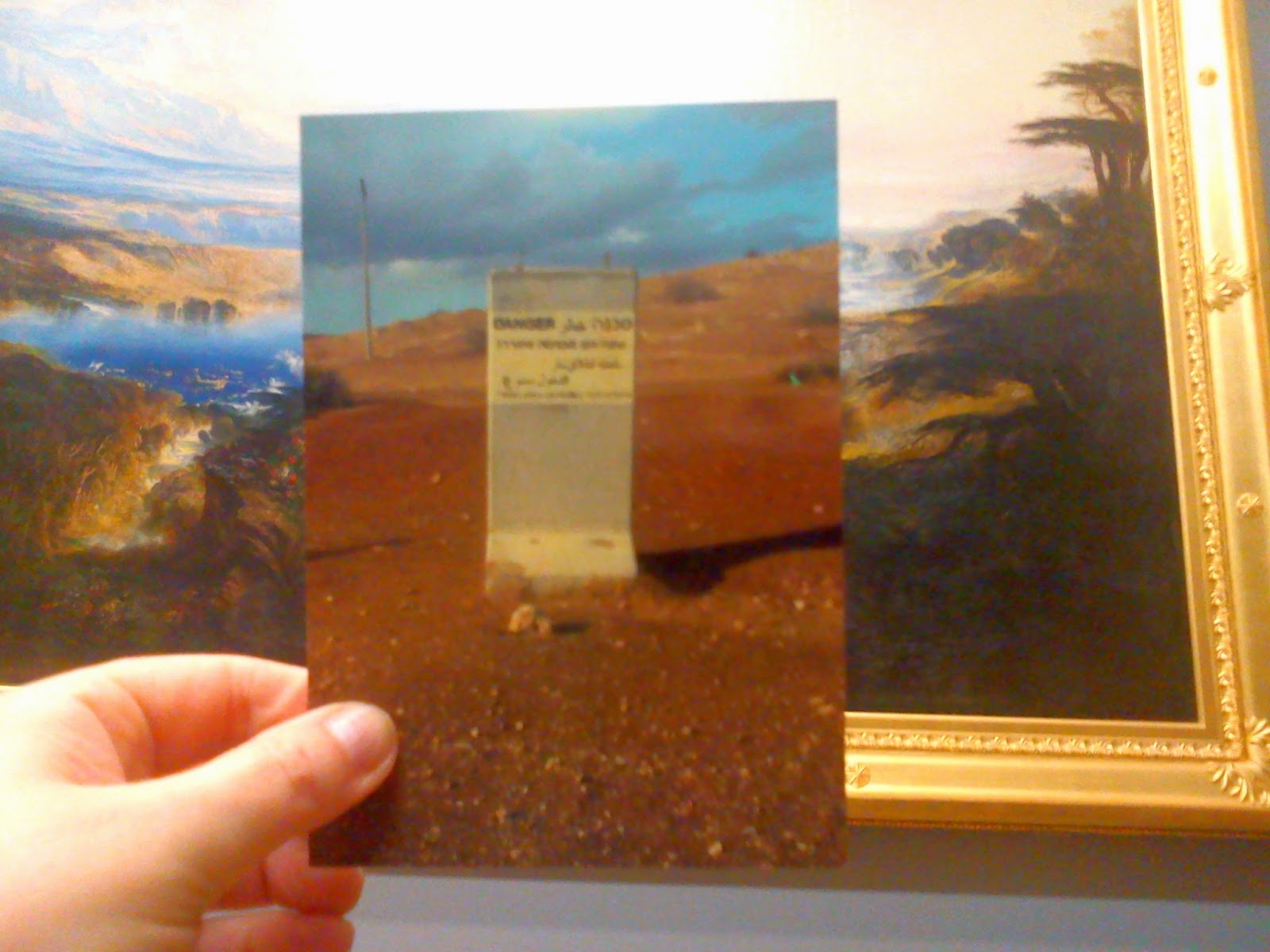 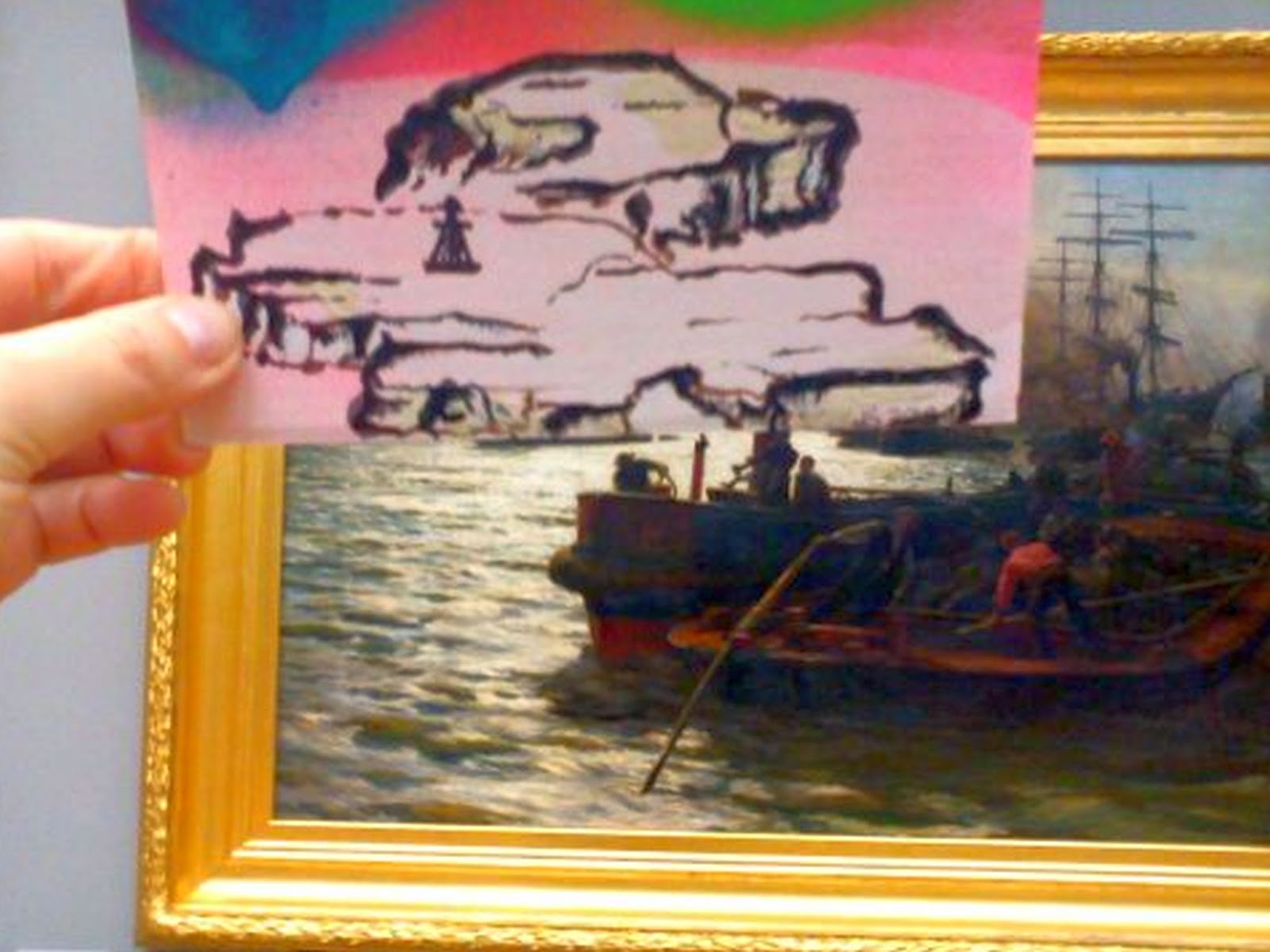 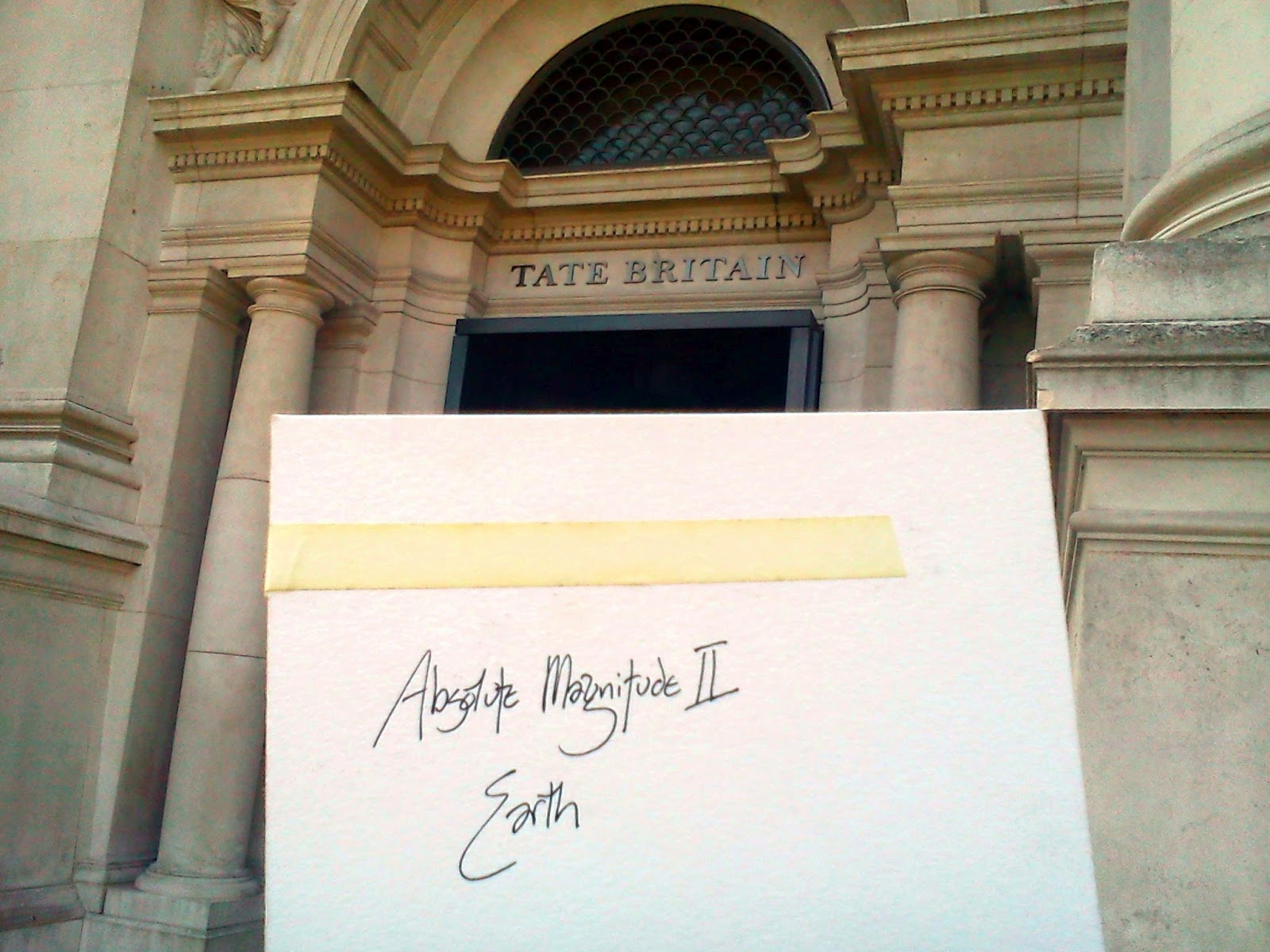 I collected several other postcards with views of the sun, a couple new, some from the family, and others vintage – the earliest is from 1910. I wanted to link these with the MA work using a visual theme, and show all within the context of sun postcards. When the packet arrived, my original plan of showing everything in a plain black frame didn’t look effective, and so I chose a large painted board – an abstract painting I had done some years ago. I matched the cards visually to the colours beneath. I wanted to create an artwork rather than a display, to create visual relationships between all the pieces, so that they could be read in different ways, and to give some sense of time and how collections become historical. The board was mounted on a large easel and shown at theViewergallery one day launch, in the Original Gallery, London, October 2011. About a hundred people saw it. The best reaction was an older lady, who drew up a chair and spent a full half hour in front of it, totally engrossed and fascinated. 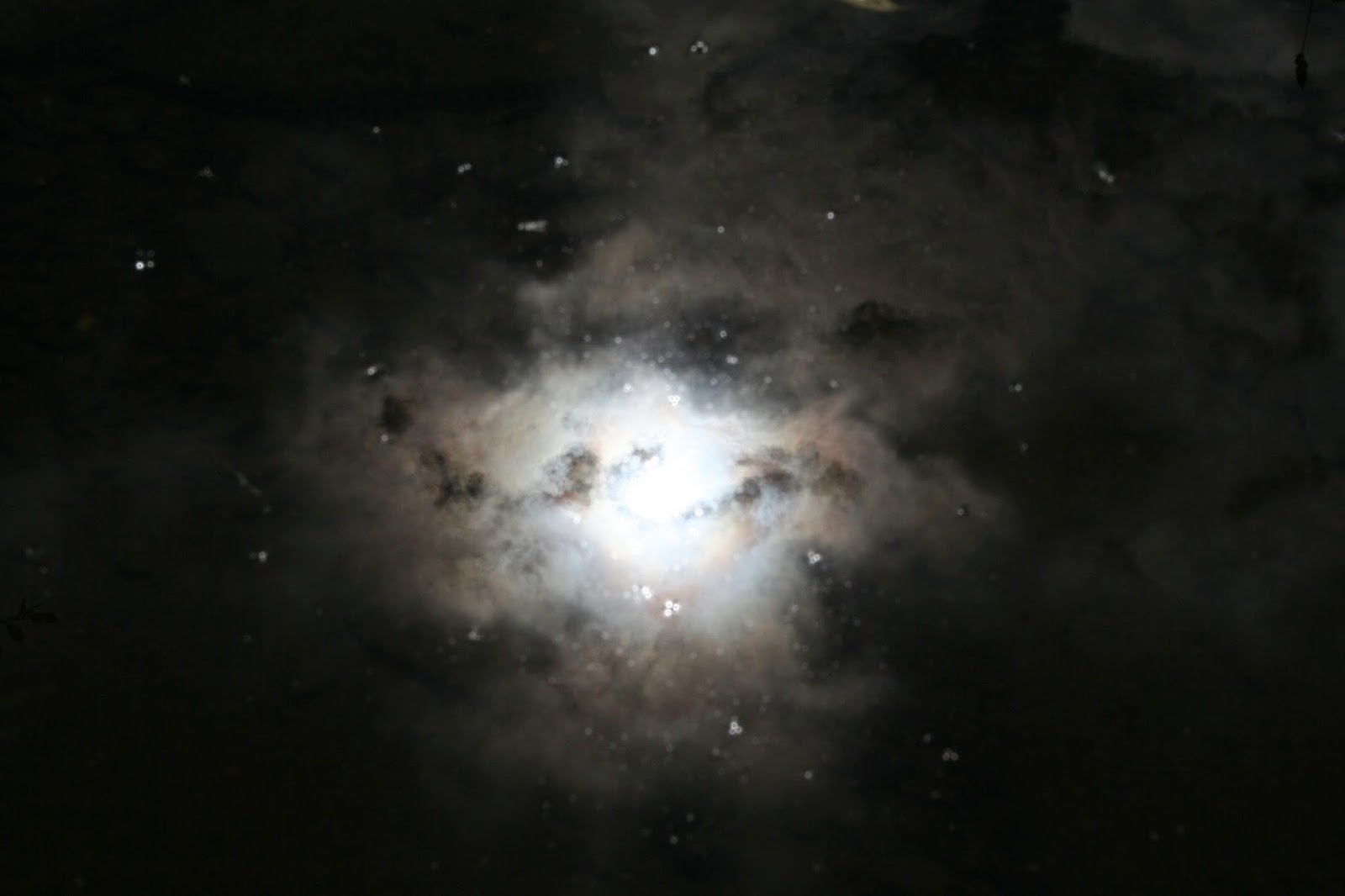